Winter Sports day was thankfully a sunny day, which was perfect for a sport filled day.  The seniors from Putaruru College did an amazing job at coaching the teams and keeping the kids in line. It was great to see that all the kids tried their hardest in their games  and made new friends while playing sports they loved. Overall it was a great day of learning and to step out of our comfort zones and have fun.

On Tuesday 27th of August 2019, Putaruru College and the surrounding schools had a Winter Sports Day. This is where all of the surrounding schools come together to play sport. There were three different sports you could play, soccer, netball or rugby. There were also two canteens. One by the soccer and rugby fields that sold food like crunchie bars, sausage sizzles and fizzie like Coke and Fanta. There was also one by the netball courts. That one sold proper food like nachos, sausage rolls and pies. The day was split into different rounds with teams made up of different schools. Most of the girls played netball while most boys played rugby although, some of the girls played rugby. The soccer was  the most popular, made up of a mixture of girls and boys. Everyone had a good time, as the sun shone all day, although there was a small drizzle in the morning. 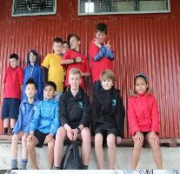